The Secret Super Battle Best in Japan 1999 was the national championships for seniors division (junior high year 3 to high school year 2) Pokemon TCG players in 1999. The event was one of the culminating events of the Challenge Road 1999 Summer tournament circuit. The equivalent tournament for juniors division players was the Tropical Mega Battle Best in Japan 1999, which was held in Hawaii, USA.

The event was held on August 22, 1999 in a secret location in Tokyo, Japan. All available tournament reports and recaps do not disclose the venue location, so it is still unknown where it took place.

Players were given a set of rules from “Card Master Takahashi”. It’s likely that these rules described restricted on what players could include in their decks, but unfortunately they are unknown. A small image of the rules was published in the Trainer’s Magazine Vol.3, but it is too low-resolution to read.

The event was invite-only, and participants earned their invite by placing in the top 3 of the regional Challenge Road 1999 Summer events. This meant that 4 players from each regional event were invited, since 3rd and 4th place were both considered in the top 3.

Since there were 9 tournaments across Japan during Challenge Road Summer, this meant that 36 players were invited to the Secret Super Battle finals. 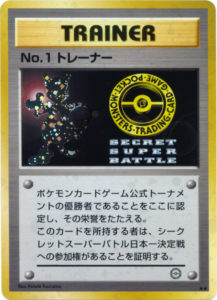 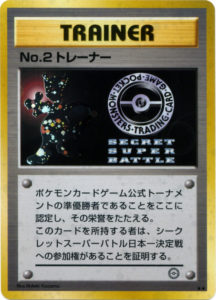 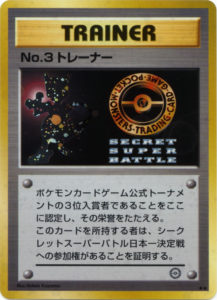 In order to bring the number of contestants to 30, there were playoff matches among the 4th place players before the official tournament began.

This was played in a well-lit room, likely in the same location judging from the image on the right compared to photos from the darkened room used during the Secret Super Battle.

Invited players stayed at a hotel in Tokyo, and took a bus straight from the hotel to the venue location. The venue was dimly lit, and at 9:00 local time, the room went dark. A screen turned on and would display player names & photos on-by-one. These players would be invited to come down the stairs to the room where the games would be played.

The top 2 players from each of the 6 tables were allowed to proceed to the finals of the Secret Super Battle. At 11:01 local time, the 12 players that would comprise the final players were confirmed.

After the qualifying round there was a lunch break before the finals.

After the lunch break, the first round of the final tournament began at 12:07. Card Master Takahashi commentated on the matches in the final rounds for the audience. The matches in the quarter-finals and onward were single-elimination, and the quarterfinals concluded shortly after at 12:38.

The championship match was held between Kenji Kajita and Keisuke Miyadera, while the 3rd place playoffs was between Yusaku Tanigawa and Keisuke Sato. The final competitors came from the following regional tournaments:

Other participants were able to watch the final matches on a TV monitor. The championship match began at 13:22. Kajiya and Miyadera were friends who had played the Pokemon TCG together previously, but in the end, Kajita won the match. Tanigawa and Sato’s match almost went to the time limit, and Tanigawa ended up claiming the 3rd place spot.

The top 3 winners each received a medal with a Mewtwo design, similar to the Tropical Mega Battle’s Exeggutor’s medals.